There are tons of movies and shows based off books. Sometimes I find out after I’ve watched a show or movie that it was based on a book. I used to try to read the book first and then watch the show or movie. That doesn’t always happen and I’ve made peace with it.

Do you watch the movie or show first or do you read the book? 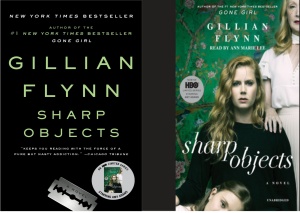 I finally got around to reading Sharp Objects by Gillian Flynn. I had watched the show prior when it first came out. Although I enjoyed the book, I liked the show a bit better.

Both the book and the show had that dark vibe to it but I think the show was a bit more dark and if you know me, you know I love me some dark.

I feel a lot had to do with the actors/actresses and directing to bring that darkness and thriller to life.

I remember binge watching this with a friend and we were hooked! 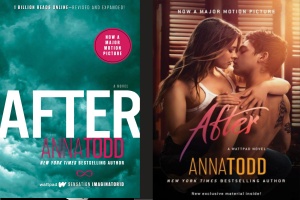 I kept hearing about the movie, After and saw it was based on a book. I decided to read it before watching the movie. If you follow my reviews, you know my feelings on it. I decided to watch the movie and compare the two.

The movie is slightly different than the book. Oh what a surprise *heavy sarcasm*

In the movie, they made Hardin more likable. Book Hardin is a HUGE jerk. I am the few that wasn’t totally crazy about this book/movie. Check out my review for my feelings on it.

“You” has been a huge success and before watching it, I wanted to read the book. I did and I was a little disappointed. The hype had set my expectations really high.

I started the show and totally binge watched it over the weekend. The show again was slightly different than the book. The actors/actresses did a great job! Am I supposed to like Joe? Probably not but I do. Thanks Netflix and Penn Badgley!

I have plans on reading the second book, Hidden Bodies and then tackling the show after.

I will have more Page to Screen coming.

Let me know in the comments some of your favorite page to screen movies or shows.

Title: After (The After Series Book 1)

There was the time before Tessa met Hardin, and then there’s everything AFTER… Life will never be the same. #Hessa

Tessa is a good girl with a sweet, reliable boyfriend back home. She’s got direction, ambition, and a mother who’s intent on keeping her that way.

But she’s barely moved into her freshman dorm when she runs into Hardin. With his tousled brown hair, cocky British accent, and tattoos, Hardin is cute and different from what she’s used to.

But he’s also rude—to the point of cruelty, even. For all his attitude, Tessa should hate Hardin. And she does—until she finds herself alone with him in his room. Something about his dark mood grabs her, and when they kiss it ignites within her a passion she’s never known before.

He’ll call her beautiful, then insist he isn’t the one for her and disappear again and again. Despite the reckless way he treats her, Tessa is compelled to dig deeper and find the real Hardin beneath all his lies. He pushes her away again and again, yet every time she pushes back, he only pulls her in deeper.

Tessa already has the perfect boyfriend. So why is she trying so hard to overcome her own hurt pride and Hardin’s prejudice about nice girls like her?

I’m going to be honest. I hadn’t heard of this series until the movie came out on Netflix. Then I found out it was a book. Everyone kept saying how good it was, so I got the book and decided to read it before watching.

This book is like, it’s so bad it ends up being kind of good. Like a train wreck. I kept shaking my head and saying “What the hell Tessa?!” or “FFS!” but I kept going because I needed to know where this train wreck would end up. At times, it was exhausting the back and forth between the two.

Now, I’m not going to get into detail what I think about Hardin’s behavior. It’s classic girl meets boy. Boy is a major jerk but she doesn’t give up on him because she thinks he will change for her. He doesn’t. Yeah no. This is a big part of why the story didn’t work for me.

Despite my issues with the story, I am curious to see what happens in the next book. Yeah that whole train wreck syndrome. I can see the appeal this books has to others but sadly it wasn’t for me. I give this 3 stars.