Somewhere in the Dark: A Novel by R.J. Jacobs – My Review 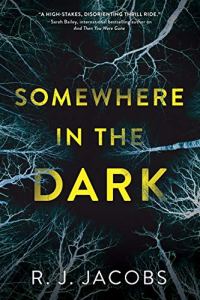 Title: Somewhere in the Dark: A Novel

Exploring lives on the brink of disaster, R. J. Jacobs returns with another compulsively readable novel of suspense for fans of B. A. Paris and Mary Kubica.

Do the mistakes of the past mark us as guilty for life?

After a childhood marred by neglect, Jessie Duval’s finally got it together. With an apartment in Nashville and a job with a catering company, she’s thriving.

But all that changes when Jessie works an event where celebrities will be in attendance–including the one person from her past she must avoid at all costs: singer Shelly James. Jessie doesn’t hate Shelly. Quite the opposite. One summer, she followed Shelly’s tour everywhere. Only, Shelly wasn’t flattered; she was terrified by Jessie’s devotion–especially after Jessie was arrested. But after a year of therapy, Jessie understands what happened. She’s not the same person anymore.

Jessie keeps her head down, but when Shelly is found dead, Jessie’s troubled past comes tumbling out and she quickly becomes a suspect in the high-profile murder. As the police close in on her, ignoring other credible leads, Jessie realizes Shelly’s murder will be pinned on her–the perfect scapegoat–unless she finds the real killer. And no one knows Shelly’s life and inner circle better than her. But she will have to go deeper into the dark–if ever she wants to find her way out.

This was a fast paced read that will have you guessing until the end.

I was looking for something to read that would give me a reality escape and this book was the answer! I loved that the author gave us a backstory right away. It helped me understand the character much more. While this was a highly enjoyable read for me, there were some parts that lagged and some parts that felt rushed. It wasn’t enough to take away from the story and the story ended up finding its way. There are some really good twists and I like that I couldn’t figure out who did it. I was so engaged in the story that I didn’t put it down once. I HAD to know how it would end!

This is a great thrilling suspense filled read! Somewhere in the Dark is my first R.J. Jacobs read. I enjoyed his writing style and look forward to reading more. I give this 4 stars.

My name is Laura and I am a Makeup Junkie, Book Dragon, Blogger, Beta Reader, and PA I’ve always loved both books and makeup. I’m always reading at least two or three books at any given time. Email: theliteraryvixen@gmail.com END_OF_DOCUMENT_TOKEN_TO_BE_REPLACED
This entry was posted on Friday, March 20th, 2020 at 7:00 AM and tagged with 4 Stars, Coming Soon, Pre-Order, Psychological Thriller, R.J. Jacobs, Review, Somewhere in the Dark: A Novel, The Literary Vixen and posted in Coming Soon, Review. You can follow any responses to this entry through the RSS 2.0 feed.
« The Risen: Margaret by Marie F. Crow – My Review
✮☆ Free Friday Download ☆✮ »