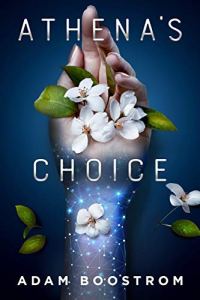 Athena Vosh lives just like any other teenager from the year 2099. She watches reality shows with her friends, eats well, and occasionally wonders to herself: what would life be like if men were still alive?

It has been almost 50 years since an experimental virus accidentally killed all the men on earth. However, a controversial project is currently underway to bring men back. There’s just one catch. The project has been sabotaged.

So begins the award-winning novel, Athena’s Choice. When the police of 2099 are tasked with finding the saboteur, they receive a mysterious command to investigate the otherwise innocuous Athena Vosh. After it becomes clear that the young girl might know more than she lets on, Athena is brought in to participate in the official investigation. Simultaneously, the girl begins to experience a series of cryptic dreams featuring a ruined library and an old book containing the saboteur’s true identity. As the police close in on their prize, Athena finds herself on a journey of her own. Her clue-filled dreams and incorruptible spirit bring her face-to-face with a pair of forgotten truths about happiness and gender. The world waits to see if men will return as Athena fights a separate battle, culminating in the choice that will define her and others’ lives forever.

Athena Vosh’s life was pretty normal. As normal as it can be in the year 2099. Every day was the same. Until the dreams started happening. What did they mean? Whisked from her mundane life, she is invited to help solve a crime that’s been committed. Could this be her chance at greatness?

I didn’t know what to expect going into this book. A virus that had wiped out the men? Like whoa!! Athena’s Choice is an entertaining read. I was pleasantly surprised! The cover is pretty. I could tell the author put a lot of work into the story and details. Adding touches here and there to tie this story together. It wasn’t hard to imagine a world like that at all. Athena is a likable character. She wasn’t a standout to me but held her own. Some of my fave characters were in the background. Loved Mirza! Even Valerie. This is a new to me author and I look forward to seeing more. A great sci-fi read! I give it 4 stars.

My name is Laura and I am a Makeup Junkie, Book Dragon, Blogger, Beta Reader, and PA I’ve always loved both books and makeup. I’m always reading at least two or three books at any given time. Email: theliteraryvixen@gmail.com END_OF_DOCUMENT_TOKEN_TO_BE_REPLACED
This entry was posted on Friday, September 6th, 2019 at 7:00 AM and tagged with 4 Stars, Adam Boostrom, Athena's Choice, Dystopian Fiction, Review, The Literary Vixen and posted in Review. You can follow any responses to this entry through the RSS 2.0 feed.
« Perfect Memories (The Perfect Series) by L. Powell – My Review
✮☆ Free Download Friday ☆✮ »