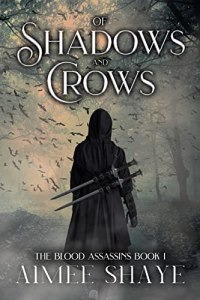 Of Shadows and Crows (The Blood Assassin Book 1) by Aimee Shaye is now available!

To be a Sister of the Assembly is a birthright, but to be an elite assassin is a legacy.

Bria Allen is not an ordinary vampire. She is a Sister of the Assembly of Shadows, a coven of vampire assassins who hunt rogue vampires and leave the crows to feast on their dead bodies. It is Bria’s dream to become an elite assassin and walk in her parents’ shoes. Until one day, she discovers the truth.

The Assembly of Shadows isn’t what it seems.

Sava Herstoj, High Priest of the Assembly of Shadows, is the real rogue vampire. He has been plaguing the minds of assassins for years, trying to create a world where humans are mindless thralls and ritualistic sacrifices, instead of living in harmony.

It becomes Bria’s personal mission to stop him at all costs and face the hardest decision of her life: standing up to Sava Herstoj and bringing shame to her family or keeping her secrets to herself. No matter which one she chooses, everyone has something to lose.