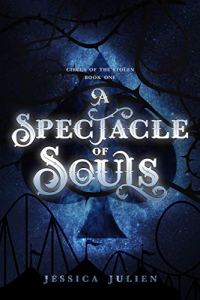 Title: A Spectacle of Souls (Circus of the Stolen Book 1)

Caitlyn always thought she was just your average small-town waitress, but she’s anything but average. Suffering from frequent headaches and vivid daydreams, her oddities mask a secret hidden deep within her mind—one that could defeat even the cleverest of psychics.

When a mysterious circus arrives in town, Caitlyn is immediately drawn to it. While visiting the hypnotic show, she meets a seer who warns her of a gruesome future and urges her to stay away. But soon, Caitlyn finds herself ensnared in the show and the Ringmaster himself.

Recognizing Caitlyn’s powers for what they are, and believing they are the ones he has been searching for, the Ringmaster is determined to claim them as his own. Trapped within the circus and the Ringmaster’s devious grip, Caitlyn realizes that to escape the seer’s foretold fate, her only choice is to fight. Banding together with Bevier, an imprisoned psychic, Meg, an eccentric seamstress, and Daniel, a handsome magician, Caitlyn falls into the Psychic Realm to thwart the Ringmaster and stop the show before they succumb to his control and are trapped forever in his spectacle of souls.

Intriguing! Fantastic! A Spectacle of Souls is that magical read that feels worlds apart. I have to say that I haven’t read anything like this and that made my black heart happy. After a couple of chapters, I was fully invested and had to keep reading till the very end. NO BREAKS! I liked that there was more to some of the characters than at first glance. Those same characters surprised me by their actions and I really liked that! The magic aspect was good and I liked the author’s take on it. It’s those little touches that can take a story from good to fantastic. This is the first book I’ve read by this author. I enjoyed her writing and storytelling style. I look forward to reading more by her. I give this 5 stars.