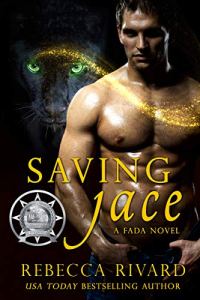 A black panther shifter with a scarred heart…

Jace Jones, a lieutenant in the Baltimore Earth Fada Clan, lost most of his entire family in the clan war known as the Darktime. Scarred by the deaths, Jace pours his soul into rebuilding the clan. The only person who has a claim on his heart is his niece. Then an attack by a fae assassin leaves him dying on a human’s doorstep.

A gutsy human who is more than she seems…

Evie is doing her best to raise a teenage brother on a waitress’s pay while taking classes toward a nursing degree. She has no time for men—until she finds Jace bleeding out in her backyard. After she saves the sexy shifter’s life, the two take the first steps toward a happily ever after. But now Evie is the fae’s new target.

And the Darktime isn’t over…

NOTE: Saving Jace is the start of the Darktime Trilogy featuring the Baltimore Earth Fada Clan. All books are standalone with an HEA, but the stories and people interconnect. If you crave dark shifters, steamy romance and intense emotional storylines, this book is for you. Keep reading for an excerpt:

Someone was watching her. Evie gripped her keys and glanced around.

Across the alley, a pair of luminous green eyes stared at her from the shadows.

Her heart kicked into a gallop. “Jace? Is that you?”

Please let it be him.

He stepped out of the shadows. She blew out a breath. It was Jace.

He crossed the alley in a few long, loose strides. An atavistic tremor went down her spine. This was the real Jace—and he was nothing like the injured, feverish victim of last week. No, this man was dark. Powerful. Raw-boned. A panther in a T-shirt and jeans.

She squared her shoulders and lifted her chin, because damn it, she’d saved the man’s life. She refused to let him spook her.

He stopped a few feet away. “Hello, Evie.”

He was bigger than she remembered, but then, last week he’d been hunched over nursing his injuries. Now she realized he was a good half foot taller than her with the lean, hard build of a soldier. Another shiver went down her spine—but this one had nothing to do with fear.

My name is Laura and I am a Makeup Junkie, Book Dragon, Blogger, Beta Reader, and PA I’ve always loved both books and makeup. I’m always reading at least two or three books at any given time. Email: theliteraryvixen@gmail.com END_OF_DOCUMENT_TOKEN_TO_BE_REPLACED
This entry was posted on Friday, November 29th, 2019 at 9:00 AM and tagged with Free Download Friday, Freebie, Paranormal, Rebecca Rivard, Saving Jace: A Fada Novel (The Fada Shapeshifter Series Book 4), The Literary Vixen, Urban Fantasy and posted in Free Download Friday, Freebie. You can follow any responses to this entry through the RSS 2.0 feed.
« The Patient: A Novel by Steena Holmes – My Review
✮☆ Free Download Friday ☆✮ »